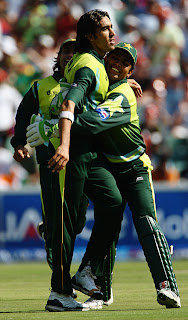 This was to be my canned response to my Pakistani co-workers next day. I started practicing it when Umar Gul scalped Yuvraj, Dhoni, and Gambhir. When Arafat came in, with a single agenda of bowling yorker after yorker, things were starting to look bleak for us. We practiced our lines:

“It was a good day for Cricket.”

“In the end, cricket was the winner.”

With 19.2 overs left, Rohit Sharma slammed a slower ball down midwicket, almost into the hands of Hafeez who bungled it, helping the ball on its way to a six.

“Yeh Sixer unko bhaari padega.” (“This six will prove to be decisive.“)

157 runs on the board. We needed our bowlers to strike the opposition out. RP Singh provided the first breakthrough for , Sreesanth provided theirs, with 21 runs of his first over. If Imran Nazir had played for 5 more overs, I would have been blogging about quantum physics, and how ephemeral reality is, how every atom spins its own tangled web. Fortunately, Uthappa’s throw overpowered Nazir’s weak legs, Younis Khan mis-hit a hit-me ball from Joginder Sharma, and Pathan tilted the scales in our favour, when Shoaib Malik and Afridi were dismissed cheaply.

At 77/6, it looked like we’d choke them with an escalating run-rate, But Mizbah Ul Haq had other plans. He hit Harbhajan for three sixes, Tanvir hit Sreesanth for two, and in the final over, needed just 13 of 6 balls.

For Harbhajan, it was too much. He had given practically nothing in the previous matches, but his yorkers weren’t spearing in like before. With Mizbah on strike, the ball went to Joginder Sharma, our sacrificial lamb, a junior medium pacer who surprisingly had been spared until then, in spite of some pathetic outside-the-line-of-the-off-stump bowling.

That ball must have been real burden, a deadweight heavy enough to sink reputations, condemn the bowler to a life of ridicule and ignominy. Chetan Sharma never got a chance to coach the team, redeem himself in a 3 hour fantasy like Kabir Khan. Last I knew, he provides languid post-match analysis for Doordarshan, the lowest totem pole for cricket presenters.

The first ball went for a wide, the second was almost a wide. Third ball was a six. Mizbah skied Joginder’s dolly and the ball flew and flew, all the way to the boundary. 6 runs of four balls.

And then Sreesanth’s email to god was answered. God, in his all his infinite magnanimity bestowed him with a sitter. But first, God made Sreesanth realise that all glory is fleeting. God made us lose the ODI World Cup. God made Sreesanth’s overs fly to all parts of the stadium in the final. Just to fuck with him. To show him who’s boss. He’s got a wicked sense of humour. But he’s also democratic. There were a billion Indians, praying to their various gods, and then Allah and Vishnu and Jesus and Ganesha played a dirty game of coalition vote bank politics, and made that scoop shot fall into Sreesanth’s hands. 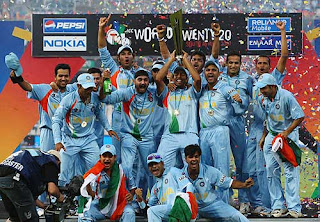 We won. We did? You and me? Good on ya mate. Yeah it was your maiden over to Mizbah that made all the difference. That hatrick you bowled.

We like winners. We’re all winners. Champion swimmers. But let’s give credit where credit is due.

RP Singh: Devastatingly accurate, lethal pace, swing, and highly conservative in giving runs. He was the pillar of our bowling attack. Took wickets in each game, bowled well in the death overs, troubled all batsmen.

Irfan Pathan: His comeback has been brilliant. He reminds me of Wasim Akram, dangerous on any pitch, because he’s always got something up his sleeve. In this series, he seldom gave loose balls, took wickets all the time, altered the pace to keep the batsmen from timing their slog hits.

Rohit Sharma: A virtual unknown, he shouldered responsibility in a crucial match vs. South Africa, and provided us with a defendable total on a dangerous pitch, tailor made for the South African pace attack. That run out of Kemp showed us what a young bunch can do. We fielded better than the South Africans! The big 3 never looked this good on the field.

Yuvraj Singh: Six sixes, a revenge hit against , some payback it was. You don’t need to take your shirt off to prove a point, if you let your bat do the talking. He gave the 20 run edge that made the final difference in that match. Against , he turned the tide from the moment he stepped in. The faster it came, the farther it went.

Harbhajan Singh: Dhoni’s gameplan was the same for all of our last 5 matches: post a decent enough total, and let Harbhajan and Pathan choke them. In the death overs, he took on big hitters and kept bowling right on their toes. If the batsman backed up a bit and tried to make space for himself, his ball would follow. He cramped batsmen when they were itching for bit of space to swing. He cramped everyone but Mizbah in the final.

Gautam Gambhir: He looked like a positive cricketer to me, even when he had a rather subdued ODI series against . His opening partnerships with Sehwag gave us good starts for the middle order to capitalise on.

Sreesanth: He’s inconsistent, stark raving mad, but when he finds his rhythm, he’s a dangerous bowler. His spell against was brilliant – psyched, aggressive, and accurate. The image of him punching the ground like Donkey Kong after taking Hayden’s wicket is forever burnt into my memory.

Yesterday night, we went out for a drive, to seek other Indians who shared the exhilaration of believing they’d won something. What had we won? There were celebrations in the Meena Bazar, an Indian ghetto in , where thousands of Indians were out on the streets. Flags, confetti and carbonated cola was in the air. Some chanted “Ganpati Bappa Morya”; it wasn’t politically correct, and didn’t catch on much. I threw in my Shaivite allegiance into the ring: “Jai Bholenaath!”, but that didn’t catch on much either. The loudest chants were for “Bharat Mata Ki Jai”

This wasn’t patriotism. Patriotism is love for the patriarchy. Love for the motherland, we can all agree upon. Yesterday, it was stronger than religion. And that’s a good enough reason to cheer.