dude i seriously wanna be a rebel now

me: To Shirdi to the Red Fort
Rourkela Yeah u know
>From to Orissa
Say hoi oh hoi
(Say hoi hoh hoi) 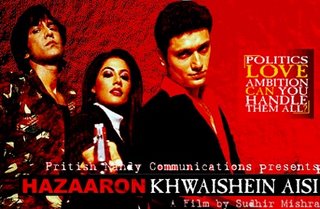 Ten years from now, will anyone give a rat’s ass for Rang De Basanti? I sincerely hope not. These lyrics were penned by an advertising copywriter who pushed Coke; and guilty by association, the fizz won’t last.

And for all its incendiary rhetoric, I didn’t hear of a single suicide bomber, attack, or assasination attempt at Arjun Singh during the entire reservation fiasco. So bollocks to that. Even the Mandal comission era had glorious acts of self immolation, in the vein of the Burning Monk. Surely one guy in a billon would be supremely pissed off, and inspired by the sacrifices of our Bollywood stars you figure..

But that’s what movies do. They externalise our heroes, our struggles, while we suck our thumbs and search desperately for the next distraction.

Hazaaron Khwaishein Aisi on the other hand, will age like fine wine. Written by Sudhir Mishra, Ruchi Narain and Shiv Subramaniam, they bring together their mastery of ideas and dialects: The Hindi was tight, and the English wasn’t trite…

The story is set in the year 1969, the year when the whole world was swinging; or at least, certain packets of were. Like our protagonists in this movie, studying at Delhi University, who all come from different backgrounds. Siddharth, the rich son of an ex-judge, is an idealist, who believes that he can change the system. Vikram is his opposite, a lower middle class guy who works within the constraints of the system, instead of fighting it. He fixes, deals, and bribes his way to success, charming men and women with ease. And then there’s the tug of war for the girl: Geeta Rao, who is split between loving a commie and a capitalist.

In the following years, under the rule of Indira Gandhi declares an emergency. Vikram grows rich and successful, infiltrating political circles to get papers passed, while Siddarth joins the Naxalite movment in to help the lower castes rise up to power. The girl sort of bounces back and forth.

I was hoping that the movie would subtly use the love triangle to illustrate the triumph of capitalism over socialism, with Siddharth growing bitter, weak and isolated, while Vikram, now rich and powerful, gets the love of his life. but the movie does not take a ideological standpoint. It doesn’t take any sides, and cops out instead, by doing a weird kahani mein twist.

That aside, the movie is A-grade at everything, from casting, cinematography, dialogues, to its historical grasp of that era. This movie is to India what Underground was to Yugoslavia. The backdrops are rendered faithfully with nice little touches that narrate history without dwelling on it as the primary subject matter.

I left this movie with a deep appreciation for Sudhir Mishra, who has made some amazing movies in his career.

These are the kind of movies that would benefit immensely from Internet distribution. I would buy it out of gratitude.