I saw rather disappointing Rescue Dawn a few weeks ago – I watched it only because it was directed by Herzog, but it was a betrayal of his temperament and style.

Man vs Nature is the prevailing theme in Grizzly Man, Aguirre, and Fitzcarraldo, but Rescue Dawn despite treading the same lines was so uncharacteristic of Herzog that you have to chalk it up as a commercial cop-out, like when Roberto Rodriguez made Spy Kids. With Encounters at the End of the World, he is back in form, back to the top of the list of my favorite people. Rarely do movies make me feel warm and fuzzy all over long after the movie’s been watched. 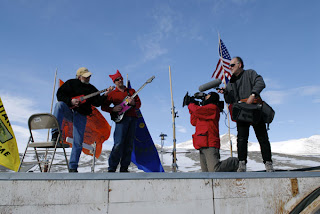 The core of Herzog’s philosophies haven’t changed – Nature is still the enemy, man is still doomed, but at the southern most tip of the planet, you meet folks with the most redeeming of qualities – the hunger to be free and explore.

In his travels to Antarctica, Werner Herzog forewarns his sponsors – The National Science Foundation – that this won’t be a movie about cute fluffy penguins – rather, his interests lay the other bipeds now settled in the continent – humans. The big question being, why is it that some humans have an irrational urge to travel and explore? What kinks drive them to subject themselves in high risk and pain, at the harshest climates, to the top of the world, or the south pole? 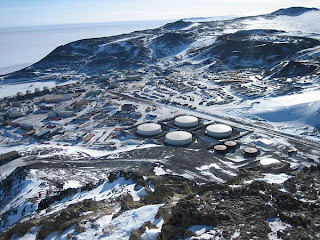 He meets the craziest freaks in and around McMurdo, a volcanic island at the edge of Antarctica. He interviews free spirits and compulsive adventurers, some of whom also happen to be Ph.D.’s, scientists, and researchers. You meet a climatologist who studies the gradual decay of icebergs, huge swathes of frozen water breaking loose and heading north. You meet a reclusive wildlife expert who has been studying penguins for twenty years. And you get to hear an unbelievable psychedelic orchestra of seals.

I saw this movie at the Dubai Film Festival, so it might be a while before it is out on DVD, but if you get to watch this movie on the big screen, please do. Herzog’s dry, accented narrative is hilarious, bordering on the absurd, and on many occasions the camera stays pinned on a character, long after he has nothing to say, silences rendered stark in the pin-drop silence of Antarctica.

Oh, and by the way, Herzog also destroys all illusions of monogamous love purported in March of the Penguins by asking a bunch of questions to the real penguin expert. Guess what, there are whores among penguins, some of them are gay, some of them are just crazy.