The 84th Annual Academy Awards start on February 26th, 2012, and we’ve already lined up a few iOS Apps that can serve you as a viewing companion. This week, we spend our CPU cycles critiquing why the 1996 movie Hackers has some of the weirdest ideas of what a computer can do, or looks like. 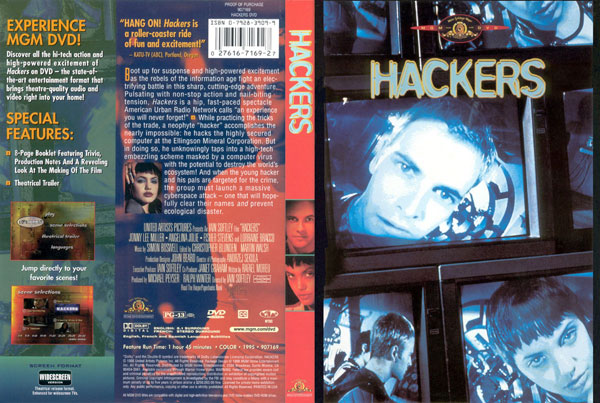 Summary: A neophyte “hacker” becomes the target of the FBI after he unknowingly taps into a high-tech embezzling scheme which could cause a horrific environmental disaster in this suspenseful drama. (MGM) Background: With a Metacritic score of 46, and an aggregate score of 31 on Rottentomatoes, Hackers suffers from bad acting and writing as much as timing, as it fetishizes quaint technology like pagers, floppy disks, and 28.8kbps baud modems.  Filmed in an era before cell phones, p2p software, broadband, streaming video, Twitter, Wikipedia, Google, Anonymous and Wikileaks, Hackers has aged more like e-waste than fine wine. To its credit, the movie script freely lifts quotes from Ginsberg and BBS-era alt.2600 newsgroups, serving as a valuable cultural artifact that spawned many internet memes in the years to follow. The movie’s political slant can be seen as a foreshadowing of modern day hacktivism by groups like Lulzsec, Anonymous, and Wikileaks, it’s also  a goldmine of unintended hilarity, a treasure trove that we’ll be exploring in greater depth in  screenshot tour below. Here are some of the most bloggable, WTF(!) moments from Hackers, worthy of discussion and internet commentary. 8:05: Acid Burn and Crash Override VHS Tape Battle Just download the DVD RIP to witness this truly epic hacker battle fought over 386 computers and dial-up modems. The tempo of this dial-up battle centres around a robotic tape machine at a TV station. Without CG effects and render farms, the scene has to make do with splices metaphorical imagery of gladiators, cowboy westerns, and dinosaurs fighting to depict the Darwinian brutality and athletic temperament of our zesty culture jammers. Rafael Moreu is clearly hip to internet chat lingo from the 90s.

15:00: Feat. Cereal Killer, at Cyberdelia Dade rollerblades his way into a hip club situated in a grim and gritty part of New York, where pirated software is sold on the streets. Also being hawked is a special bootleg compilation of “Artists Who Choked On Their Own Vomit” by a hyperactive hacker known as Cereal Killer (Mathew Lilard). Years later, Lilard would be haunted by his portrayal of the hacker stereotype by Somethingawful writer David Thorpe, who offered $100 to go back in time and punch him in the face. The shenanigans to follow soon became one of the most informative social media lessons on why you should pull back on every punch, whether offered or reciprocal on Twitter.

Geek lingo and the fetishization of outdated computer technology Traditional portrayal of hackers or hacking in popular cinema is usually simplified and spurious, and the butt of some pretty old-skool internet humour. Much like Wired magazine, Hackers is an instructional guide for poseurs on how to casually adopt the lifestyle elements of hacker culture. The script boldly name-drops countless buzz-worthy keywords, lingo, brand names, specs and quotes from its time. Sadly, the mid nineties weren’t the best time to be shopping for computer hardware. Even a even a Micromax dual SIM phone would have seemed like science fiction in this setting.

Keyboard commandos: Where is the pg down and numlock key now, bitch?

Yeah, well. Does it have USB?

The cutting edge in social networking and flashmob technology 17 years ago.

This is pathetic even by dial-up standards.

During pre-napster days, this was the worst way to exchange mp3s.

“Angel-headed hipsters burning for the ancient heavenly connection to the starry dynamo in the machinery of the night.”

From the Phrack Text files
“This is our world now. The world of the electron and the switch, the beauty of the baud. We exist without nationality, skin color, or religious bias. You wage wars, murder, cheat, lie to us and try to make us believe it’s for our own good, yet we’re the criminals. Yes, I am a criminal. My crime is that of curiosity. I am a hacker and this is my manifesto. You may stop me, but you can’t stop us all.”

“If you want a seriously righteous hack, you should score one of those Gibsons…”