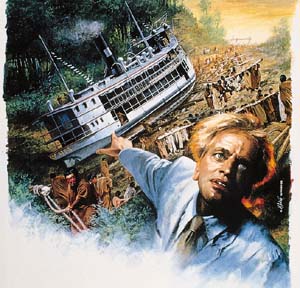 Having been previously briefed on Herzog’s brand of cynicism, I couldn’t help being guardedly enthusiastic when I saw a 300 ton steamship being tugged across a hill, as Caruso wailed, sonorously and majestically on a high note that seemed to pull it with some kind of psychokinetic will. It’s an unforgettable scene, one that has as much drama and passion off screen as much as on it.

Fitzcarraldo has some common threads with Aguirre: Wrath of God: The mighty Amazon river and Klaus Kinski are pitted against another, two forces of nature, indomitable in their own ways.
Brian Sweeney Fitzgerald, a.k.a Fitzcarraldo, as the Peruvian natives call him, is a fledgling Irish entrepreneur who sells ice in a town where all the other Spaniards sell rubber. His last big business idea was to start a rail road, earning him the reputation of the village idiot. Most natives have been colonised by the Spanish and put to work in rubber plantations that have made some obscenely rich. Success has eluded Fitzgerald, whose reputation for being a bungling businessman is only preceded by his love for the Opera, his highest ideal being to bring the Opera to Iquitos, Peru.

He tries to make the ends justify the means, and to achieve his ultimate goal, Fitzgerald takes on a daring mission. To ply an unnavigable river route that has never been charted, because the natives are wild untamed headshrinkers, and steep rapids have protected them from being tamed. To ply this route, Fitzgerald comes upon a bold plan.. to lift his entire boat across a steep hill that divides two rivers, so he can ferry the boat down the river path where the rubber trees havent exploited.

Colonising the headshrinkers with the awesome power of Caruso’s music, he actually tames them into following his dastardly plan, but to their own ends.

Fitzcarraldo is quite gripping, you cannot help being moved by the awesome power of Caruso, as the Molly Aida (the steamship) tapers down the treacherous rivers of the Amazon. Kinski is all enigma, his manic zeal and crackpot posture makes a great portrait of madness. The film is slow, but compelling. The ending isn’t as depressing as you’d expect, and the characters not as one-dimensional as in Aguirre:Wrath of God. The missionaries seem more geniuine, and the business tycoons have more sides to them than just greed. And then there’s music, the irredeemable power of music, which wins over everyone else.