Facebook seems to have gone all mouthshut.com of late, and perhaps that’s what keeps vast legions of social media execs in web agencies paid – writing fake reviews and doing hit jobs. Mouthshut.com reviews seem to have a veneer of truth to them, it’s authenticity bolstered by the staggering incompetence most of the reviewers seem to show at basic things like grammar, spelling, and sentence casing, having lost these skills in the intensity of their bile-spewing blather.

Say what you’d like about it’s oblique design – Mouthshut has internalised the ideas of web 2.0 and turned it into a working model – it has ingratiated itself into the conversation, and given many a business owner sleepless nights. Taking the piss out of a product or corporation and calling them out for being money-grubbing vampires – these are the tales of internet heroism – and this sentiment is now spewing over to other social media. I’m sure every internet user in India has heard about the incident at Lemp Bar and Pub, but is the customer always right? 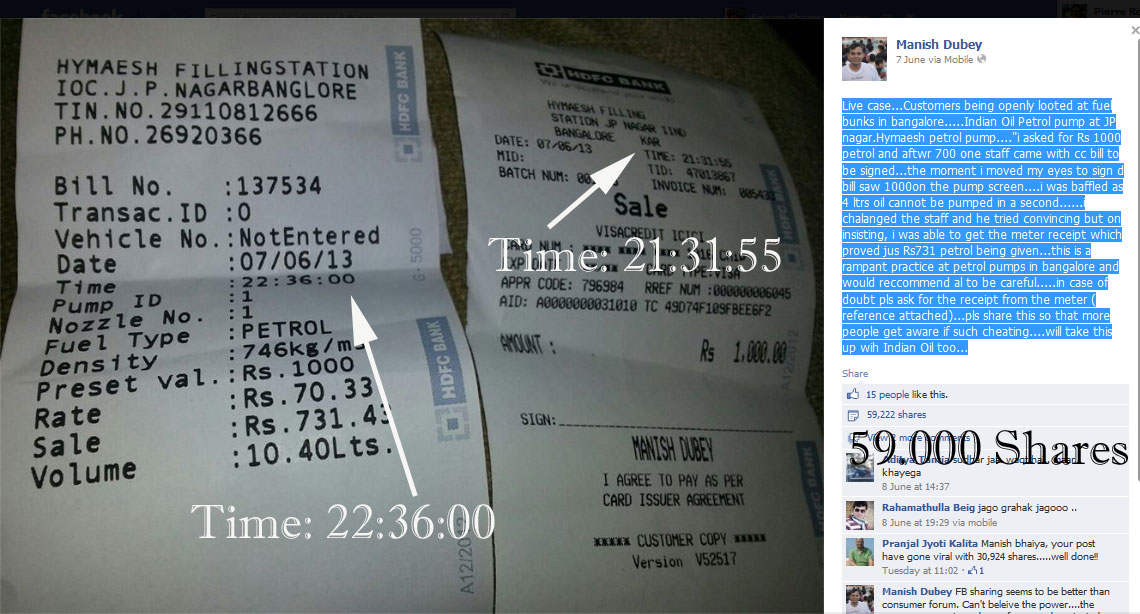 Live case…Customers being openly looted at fuel bunks in bangalore…..Indian Oil Petrol pump at JP nagar.Hymaesh petrol pump….”i asked for Rs 1000 petrol and aftwr 700 one staff came with cc bill to be signed…the moment i moved my eyes to sign d bill saw 1000on the pump screen….i was baffled as 4 ltrs oil cannot be pumped in a second……i chalanged the staff and he tried convincing but on insisting, i was able to get the meter receipt which proved jus Rs731 petrol being given…this is a rampant practice at petrol pumps in bangalore and would reccommend al to be careful…..in case of doubt pls ask for the receipt from the meter ( reference attached)…pls share this so that more people get aware if such cheating….will take this up wih Indian Oil too…

This post got 59000 shares, but nobody seems to be noticing this particular glitch in the matrix- has anyone stayed at the petrol booth for an hour to get a bill?