I’ve been listening to Kurt Vonnegut’s final fuck off to humanity, Man without a Country, which has some of the best bits from his routine, all laced with a cynical world view that we’re all doomed because of our greed and predatory instincts.

There’s a nice chapter in it, where he gives a few tips on what makes a good story, and what makes a bad one. A good story requires the protagonist to have it bad, and things happen, and things get better, then worse, then better, and the overall sum of the upswings and downswings should have the cumulative effect of an upswing.

Cinderella is one of the all time great stories. You have Cinderella, whose mother dies, (bad) and is brutalised by a step mother and her ugly sisters (bad) and is then not allowed to go to the ball (bad) but then a fairy godmother comes and gives her new shoes and a nice dress and a pimped out ride (good) and then she dances with the prince (good) and becomes the belle of the ball (good) but then the clock strikes 12 and she reverts to her original status (bad) and so on and so forth, until she finally marries the prince and they live happily ever after (doubleplus good).

This is best exemplified by Chumbawumba’s only hit single: Tubthumping. 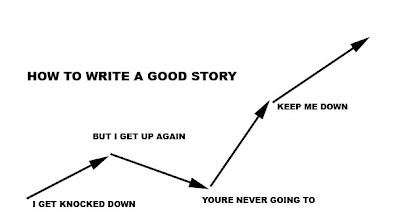 People like these kind of stories. But then there’s Shakespeare, who wrote Hamlet, which doesn’t quite follow the same graphical trend. But it was well received because it was the truth. The truth about the human condition, a rare and elusive thing, untainted by jerkoff happy endings.

For me, the marketed pre-packaged Spiderman experience began much before the movie started. It started with my friend talking about his boyhood worship of Spiderman, and how much he looked forward to the latest installment. Fanboys are overgrown kids. Like the evangelical movement, franchises gain a captive audience when they are young and impressionable, and then cash off their fierce, undying loyalty for the rest of their lives with merchandise and collectibles.

Andre (my former roomate) made me suffer through a Final Fantasy animated movie once, and I tried patiently to understand the franchise, as an anthropologist would observe tribal rituals of some isolated, indigenous group. It was utterly boring, full of inside jokes and details that I knew nothing of, and while I stretched into a jaw-breaking yawn, Andre gushed every time Cloud unleashed his buster sword against Sephiroth, and was almost in tears by the time the movie climaxed.

From a chatlog today:

Sriram: dude
you remember that final fantasy movie we saw once?
it was full on cg
Andre: which one
yeah
rocks
Sriram: while we were in dubai
Andre: ADVENT CHILDREN
yo
whay?
Sriram: it sucked

So yes, coming back to Spiderman 3, and my verdict on it. I’m not giving any stars here fuckers.
Spiderman was everything I expected it to be, and it was interesting to see how the entire package worked out. Even before the movie started, I was subjected to some unadulterated American horseshit: Advertisements for Hummer H3, Ford SUVs, Pepsi, Mc Donalds, etc.

The Mc Donalds ad was awesome. It showed how the Mc Donalds corporation handpicks choice produce from indigenous hardworking Arab peasants, with the same enthusiasm that a mother would at a market in Tunisia or Lebanon. They had this edit where they show a guy going through each slice of halal meat with a magnifying glass, examining it for manufacturing defects, etc.

My point is, I know the movie is basically a fairy tale, but even before you are whisked into that zone of suspension of disbelief, they cram some truly potent, horrifying bullshit. It’s like how some apps or cracks sneak up and install web toolbars, spyware, and popups in your PC.

Coming to the movie, (I know I’ve digressed plenty), it follows the Cinderella format, and I have no complaints with that, or expectations otherwise. I have no problems with conceiving the idea that a man gets zapped by some particle physics experiment and then becomes a self aggregating nano swarm of dust particles. Or of an alien symbiote that amplifies the qualities of the host, but finally overwhelms it and consumes it.

I only reverted into to my critical defensive posture about fourteen times. These were complete what the fuck movements, where I wanted to jam the sharp end of a pencil into the scriptwriter’s eyeballs.

1) Spiderman as Emo-Hitler: Evil Spiderman now bonded with alien symbiote and struts like a manwhore at Times Square. The only way they could portray his new found sexuality was to have him ape John Travolta in Saturday Night Live. It’s called coprophagia.

2) Aunt visits Peter’s house: Peter consorts with Aunt May when it comes to matters of love, who gives him a quick one minute sermon, and leaves, saying “Peter, I know you’ll find a way to put it right.” When has an old aunt dropped in for just five minutes? This has no basis in reality, or human history. If an Aunt visited me, she would bore the fuck out of me, bitch and moan about her arthritis, her vanishing pensions, about her horrible neighbours, inquire about every single person I was related to, and bitch some more. I would have seriously cheered for this movie if suddenly, amidst quick million dollar cuts of Petrucci like CG virtuosity, suddenly hits the breaks and gives Aunt May her best shot at an Oscar. Give us a 45 minute rant from the aunt, Sam Raimi, as an example to all aunts and relatives who have bored us out of our skulls.

3) Ramu Kaka Scene:
I’m sure everyIndian who’s ever seen a Bollywood movie knows Ramu kaka. He’s the indentured servant, who uses his stoic silence to speak out only once during the movie. He’s the arbitrator of disputes before the climax, who quickly defuses family tensions in a 3 line sermon. It’s usually a pitch that begins like most job interviews do, experience. The Ramu kaka element has now wedged itself into Spiderman 3.

What next? Drooling rape scenes? Shakti Kapoor to star in Spiderman 4?

4) Spiderman goes to church
This was a typical bollywood scene too, where the mother goes to a temple and whams all the bells and demands goddess Durga/Lakshmi/Shivato be sanctified of her misery/sins or to be granted some kind of wish.

And in his clanging of church bells, he is sanctified, born again, forgiven for his sins. But hey, it’s the accoustic properties of these bells man, stop hatin Jesus yo.

5) Amerikkaa
I knew they would put a of flag waving bit in there, and I wasn’t disappointed.

6) Spiderman Cries.
The worst risk that a director can take according to me, is to give an extra moment to a sappy scene.The sappiest of scenes arise when someone dies. The Wachowski brothers gave two extra minutes to Trinity and Neo, and when I think of Matrix 3, I only remember that extra moment of triteness and suckitude.I’m never renting/downloading/ watching Matrix 3 again.