Home
#fuckmytrip
Travelling on Mumbai’s local train metro network is a pretty depressing experience overall, its decrepit stations just add an extra dimension of horror to it. Of the three railway lines, I recommend the tourist/urban explorer a ride through the Harbour line, which connects New Bombay to Mumbai City for an authentic Salaam Bombay/Slumdog experience. It offers a sensory experience that includes gutters, feces, burnt plastic and garbage.
Of all the stations, Kurla station, which connects Mumbai’s suburban commuters stands out as one of the most darkest, depressing, blacked out spots in the Mumbai Map. TOI’s got a story in the morning paper that cites:
unmanageably massive crowds,
crowded market areas
hawkers and beggars
dirty and foul smelling toilets
limited ticket windows
This may be news to some, but it’s been that way for more than the ten years that I’ve been traveling through it. When doing a job in Andheri, getting down at Kurla station and taking a bus to Saki-Naka was like going through a post-apocalyptic nightmare. Like all other Mumbai stations it disregards commuter health and dignity entirely, covered in asbestos roofs, and years of calcified pan and gutkha spittle.
Wikipedia says:

Asbestos can be toxic. The inhalation of asbestos fibers can cause serious illnesses, including malignant lung cancer, mesothelioma (a type of malignant neoplasm dependent mostly from exposure to asbestos),[citation needed] and asbestosis (a type of pneumoconiosis). Since the mid 1980s, the European Union and most developed countries have banned asbestos.[citation needed]. Since January 1 2005 the European Union has banned all types of utilization of asbestos Directive 1999/77/EC and extraction, manufacture and processing of asbestos products Directive 2003/18/

New Bombay’s stations were quite nice when they started out, but they’re slowly being spat and shat on.
I think nothing signaled malign intent better than a toilet sign, which is at a height of around 12-15 feet, hung from the ceiling in Vashi. The board says Toilet, in Helvetica, yellow and black. Some gutkha eater had spat on this board, leaving a nice juicy thick blotch in the middle of it.
The elevator that connects Vashi station to the Infotech Park is lined with red gutkha stains on all corners, I saw half a dozen mosquitoes hovering menacingly, hitching a ride, the oil greasing the overhead fan had leaked and sprayed all the walls with a sticky black oil that had embalmed several of their forefathers.
I was wondering why public property had been abused to this extent, when a friend remarked that the Income Tax collection office was on a certain floor of the Infotech park!
Related:
I saw a toll booth on the way to Lonavala with a sign that said “Please do not spit here.”
I felt both sympathy and mirth for an employee who leaves a note sticking out of his booth like that, who asks in all humility and modesty, that he not be spat at.
Somebody had streaked a bulls-eye of red spittle on that sign too. 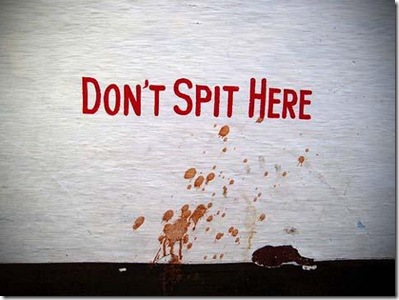