**THIS RANT MAY CONTAIN SPOILERIFFIC REFERENCES TO THE MOVIE PIRATES OF THE CARIBBEAN: AT WORLD’S END***

The Merchants of Cool know that pirates and ninjas can be always counted upon to get the box office counters ringing, even in today’s world of large scale internet piracy and Chinese DVDs.
Both these mythologies are as inherently profitable, like devotional music by Gulshan Kumar, or late night Home Shopping TV slots for ab-isolators and sauna belts.

It’s good business – Once you trap a large enough captive audience, all you have to do is figure out how much it is going to cost you to draw in an audience, how much money you’re gonna be able to fuck them out of, then leverage your marketing dollar to deliver the best possible profit ratio.

Even before these movies are actually watched by the audience, they are tested on focus groups, filled in with globalized contrivances – like Chow Yun Fat’s utterly meaningless cameo. The only reason he was cast in the movie was the producers knew the movie would do better in Asia if it had an Asian element. PoTC is so brilliantly centrist in this regard. The meeting of the 9 pirate lords was a plot concocted to please the target market, the philosophy of inclusion followed by politicians like Barack Obama and Hillary Clinton.

I don’t know who shafted this movie so badly: Did the managers of their theme parks request Calypso’s climax to be nullified, so that it would make for a better theme park ride? (A gigantic, half naked Tia Dalma wouldn’t be very PG). The final cut of PoTC is has to be pragmatically crafted, balanced against the vicissitudes of video game producers, merchandisers, theme park rides, celebrity egos, and MPAA ratings.

What I found particularly ironic, was this scene in which the scene in which the 9 pirate lords follow Kiera Knightly’s clarion call (what’s with women delivering long sermons? Even 300 had a hackneyed female plot thrown in that was nowhere in the comic book graphic novel) and raise their Pirate flags in unison prior to a showdown against Lord Cutler Beckett’s naval armada. Here’s Disney, a major motion picture distributor celebrating piracy, while simultaneously clamping down on illegal filesharing, lobbying for DRM on consumer hardware, arresting individuals who videotape movies in theaters, etc.

But the ultimate sin of this movie is that it gets self referential. Yes, fans of the franchise know that Jack Sparrow was modeled on Keith Richards. This is Keith Richards.

And this is Keith Richards with Johnny Depp, on the cover of Rolling Stone. 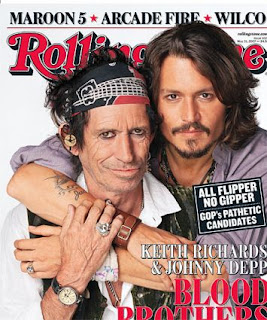 Here’s what Rolling Stone has to say about the movie:

” The good news first: Keith Richards totally rocks it playing pirate daddy to Johnny Depp’s Capt. Jack Sparrow. The deep rumble of his voice and those hooded eyes that narrowly open like the creaky gates of hell make him what the rest of this three-peat is not: authentically scary. It’s fun to see Richards swagger, even sitting down. Watch him stage a macabre reunion for Jack and his dear old mum. Don’t worry, I won’t reveal her secret.“

And that’s the first paragraph.

Everyone who’s gonna pan this movie is going to say the same thing: that the plot is more twisted than a coaxial cable, with too much time given to characters plotting, scheming, and then explaining their schemes to each other.

I’m going to pan the movie in the hopes that Disney will let this franchise die. Sweet merciful Christ, kill this franchise and deliver it from our collective consciousness. The worst outcome of all this would be if the series evolved some kind of Star Wars like mega franchise that spans three decades.