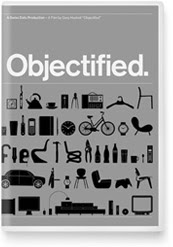 Objectified  is a documentary that looks at the world through the eyes of Gary Hustwit – the same guy who did Helvetica and Urbanized. These are well-researched documentaries that discuss ideas and trends around design from some of its savviest practitioners.

Objectified gives airtime to the designers who make the every day stuff we use – from toothbrushes to motor cars. It’s not text bookish, but has plenty of insight, some lovely nuggets around philosophy and buzzwords like the democratization of design, democratic products. A designer muses on a Japanese poet’s haiku on the “obsessive sketch”. It reflects briefly on the fact that in spite of CAD machines and rapid prototyping, the original prototypes for most products, including motor cars, are carved out by hand. The documentary also gives about five to ten minutes of screen time to Apple, with a designer explaining how they designed the uni-body enclosure that’s used in Macbooks.
I liked the idea of designing things that get better with use. Leather shoes and jeans have that tribute, as does an operating system with everything installed and configured to your liking. (it’s one reason why I never like to flatten and reinstall my OS)
It also looks at the problem that most designers philosophically face – that of sustainability. A designer recounts how his boss found a discarded toothbrush that his firm had made a few months after it was launched at a beach in the Pacific. Manufactured Landscapes takes a much better look at the production end of the product lifecycle.
I think this one guy nailed it best when he asked for a billion dollars to fund a marketing campaign for “things you already own”. Maybe a $2 frisbee would give you a lot more joy than the iPad. Just saying.

It’s all very well articulated and put together. Let me close with quote from and industrial designer in the docu: it’s both topical and relevant.

The basic idea was good design is
something you want, good design
is something that distinguishes you,
it’s sort of a mark of progress,
if you are a person who recognizes good design it
distinguishes you from all the naive and
corny bourgeois of the past, the past being
everything up to that minute.
So you can now buy into that, you can buy into
progress, good design, good taste.
And they had it available to you in a very attainable
way.
Often the way that a product comes into being isn’t
because a bunch of expert designers
sat down and said, “What are the ten most
important problems we can solve?”
There’s a company that’s writing a check. And what
the company wants is new SKU’s,
they want more stuff, and they want more people to
buy it. And that’s the name of the game.
We tend to want new things.
They can do something that has a different look, a
fresher look, a newer look,
a new-now, next-now kind of look.
And the problem with spending a lot of time
focusing on what’s very now and very next
is that it isn’t very forever. And that means it doesn’t
last, because there’s someone else coming along
trying to design what’s now and next after that.
And part of their agenda,
whether it’s over-articulated or not, is to make
whatever used to be now,
Iook like then, so that people will buy the new now.

What makes some cities happier than others? Good design obviously. Urbanized is a great watch if you want to be more specific with your demands to your local congressman or mayor.  It examines how cities around the world have dealt with their housing and transportation issues, some of the positive success stories are truly inspiring.  Enrique Peñalosa, Mayor of Bogota dishes out this fantastic quote:

“If all citizens are equal before the Law as Constitutions state in their first article, then a citizen on a $30 bicycle has the same right to safe mobility as one on a $30,000 car; and a bus with 100 passengers has a right to 100 times more road space than a car with one.”

Btw, this isn’t just rhetoric, Enrique’s made sure that Bogota’s neighborhoods are built around this principle: bicyclists get a separate road while motor cars don’t –  there are separate lanes for a fleet of buses called TransMilenio, and passengers don’t feel like lower-class citizens for taking the bus. The Mayor chose to roll out a bus system instead of a Metro as bus stops are movable infrastructure and can move to where the city’s population does.

In the future, the price of real estate or rent in a city will be determined by an app that can algorithmically compute the desirability of a neighbourhood – based on factors like green cover, water and air quality, easy of commuting, fiber-optic broadband and other such facilities. Imagine a qualitative version of Expatistan, to catch my drift.

The Epic 101s is a curated list of the best documentaries, movies, videos, and music. Whether you’re living under a rock, or behind a company firewall, or sifting through dreck on your information stream, here’s a remedial list of things that are upworthy, deserving of e-props and analysis. Add the 101’s to your media diet or torrent feed, for a drip-feed of nutritious and enlightening entertainment.