I always dismiss anyone who says America’s reign at the top is over. The Americans have a habit of doing that, building up nightmare visions of an imaginary enemy to keep their own people in place. First it was the Soviet Union, and then Japan, both claims were unfounded over time, and now we’re been told that it’s gonna be a Chinese century.

Newsflash: It takes a long time for an empire in decline to break down completely. The Byzantine empire held on to Constantinople for 249 years before it finally fell to the Ottomans. There is something positive and uplifting about that – these Che Guevera t-shirt wearing pseudo-leftist wankers will have to successfully breed for seven generations before Pashtun prayers for death to America actually lead to fruition.

I’d wager that by then, the Internet breaks down all these nation states, and we all coalesce into a singular consciousness, always wired and connected to the entire body of experience of every other living being, dead and alive, and that kind of enlightenment puts suicide bombers, evangelists, jihads, and missionaries out of work and in the rubbish bin of history.

I have a peculiar distaste people who read, advertise, or discuss shit novels by Sidney Sheldon or Dan Brown, or worse, advertise it on their facebook app. Anyone remember Michael Crichton’s Rising Sun? I read that crap when I was of an impressionable age, and lacking in the internets, and believed every word of it. At least, for a while. I forget what’s there in novels quickly and only remember the cliff notes version, god bless. When this asshole wrote a book debunking global warming, I just rolled my eyes and wondered if he was a CIA agent or something. Speaking of CIA agents, if anyone’s come across an uncle type personality with a copy of The World is Flat, please forward them Matt Taibbi’s review of the same.

I wonder now what happened to his books, if anyone reads them, now that his credibility is shot to shit. I have a theory that Hunter S Thompson killed himself because he was humiliated by how off he was in this column here, where he predicted a Kerry win.

“It is now Tuesday, and John Kerry is looking good today, while George Bush is looking a little desperate. His eyes are wild and his voice is shrill and he is acting more and more like a doomed animal on its way to the meat-grinder. Young George is about to lose his first election.

JFK will win this one decisively enough to make any recounts or challenges irrelevant. If Kerry wins New Hampshire and Pennsylvania and Florida, for instance, this election will be over before it really gets started.

Kerry will win big today. I guarantee it. The evil Bush family of central Texas is about to suffer another humiliating failure on another disastrous election day.“

What does all of this have to do with Manufactured Landscapes? It’s a documentary based on the collective works of a photographer, Edward Burtynsky, whose beat is post industrial wastelands. It’s a beautiful documentary similar in substance to the Koyanniqatsi series, with mind blowing wide angle shots, no preaching to the choir, which lets you draw your own conclusions. Ten, twenty, fifty years from now, this documentary will retain all its credibility because it commits to no statements. It just shows you a series of pictures, and lets you draw your own conclusions.

The documentary starts with a slow walk through a kilometer long walk through a factory in China, it’s a chilling scene that shows the sheer madness of the scale and size of China’s industrial might is unraveled. There is something scary about their discipline, their uniformity, an army of people hunched over their tables, doing a series of repetitive tasks. It hollows out all western rhetoric about individualism without saying a word. 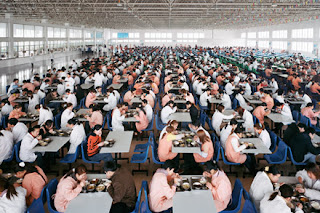 The information age doesn’t mean the industrial age is over, it’s been outsourced to China, where people are cheaper and more effective than robots. Robots aren’t are versatile as a woman’s hands; a 20 second shot of a woman assembling a complex circuit breaker convinced me of that. Her zen like movements were like a magic trick, yet, there were a few hundred other women doing the same. If the circuit breaker factory decides to make toasters, the robot would have to be scrapped, while the human being could make mental adjustments in a few minutes. 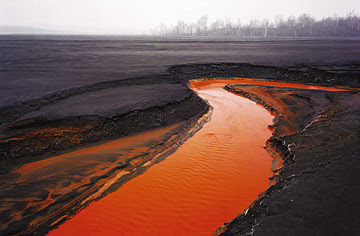 Manufactured Landscapes is a National Film Board of Canada production, and has the ambient sound of a Warp records label artist by the same name. There’s a bit of sparse, and mature commentary of Edward Burtynsky discussing his work, taking you through China, where all all the dirty, unglamorous work is done for a few cents on the dollar. In one of his shoots, Burtynsky points out that 50% of the scrapped computer parts from the world are shipped to China where laborers go at each circuit chip with a hammer to salvage precious metals, burning the remains, poisoning the soil, and destroying the water table with lethal poisons that seep through during rains. But there’s no Al Gore like sanctimonious bullshit about it. Burtynsky is more syncretist, pointing out that he drove here in a car made of iron that ran on oil, his camera, tripod, and film the products of the industrialization that he’d captured.

It’s this restraint that is missing in most so called counterculture websites, which I’m beginning to get tired of.

If you have HDTV, Manufactured Landscapes will be a worthy collector’s item, right up there with Terminator 2 and LOTR-Return of the King.